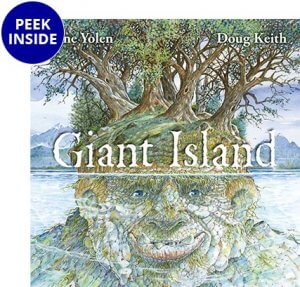 In this wondrous picture book, two children explore the caves and coves of the tiny and oddly-named Giant Island. They are thrilled to discover that the island is, in fact, a submerged giant.  A delightful, intergenerational and interspecies adventure, Giant Island charms with hints of age-old magic, and pays tribute to mystery, curiosity, and friendship. This first real fantasy picture book by Jane Yolen in ages is based on a concept and paintings by illustrator Doug Keith.

Read about the inspiration behind the magical story in Tara Lazar’s interview with Jane Yolen.

From Gregory Maguire, author of WICKED
Jane Yolen, who sees stories everywhere, takes a giant leap here. Through her text and through comic and scintillating illustrations by Doug Keith, we learn that though no man may be an island, an island might be—well, a giant adventure, at least.

From Holly Black, author of The Spiderwick Chronicles
In Jane Yolen’s world, magic is everywhere for those who know how to look, and nowhere is that more true than on Giant Island.

From Bruce Coville, author of 100+ titles
This delightful book, with its slow and delicious reveal of the life of a magical island, will enchant those children who know (much better than we adults do!) how truly alive the world can be!

From Kirkus Reviews
Childhood magic shared with a new generation.
The wonder of childhood comes alive…literally.
When Ava and Mason and their dog, Cooper, visit Giant Island with their Grandpa, they can’t figure out how it got its name; it’s a tiny island where no giant could possibly live. But Grandpa says it’s always been called that, even back when he came there to fish with his own grandpa. As he fishes from the shore, the two children and their dog explore, finding a cave teeming with ocean life, stones “shiny as mirrors,” and a great spot for swimming. As the kids round the island, observant readers will start to see what they haven’t noticed yet: The whole island is a giant: the trees, hair; the cave, an ear; and the stones, eyes. Yolen and Keith could have stopped there—lots of islands are named after what they appear to be. But no, the magic of Giant Island is that this giant is alive and moving, their arms and fingers pointing, grasping, their facial expressions changing. And while Grandpa may pretend not to know what’s going on, he and the giant share parting words and a wave: “Always good to see you, old friend.” Keith’s gouache and colored pencil illustrations wonderfully suit the seaweed tufts and tightly packed rocks of the island and the ocean life that surrounds it. Grandpa and Mason have light skin; Ava’s is slightly darker. (This book was reviewed digitally.)

From Washington Independent Review of Books
Giant Island sat low in the water as the boat approached. ‘Why is it called Giant Island?’ Ava asked, looking at the map. ‘Always been Giant Island,’ Grandpa said, shifting gears.” True, it’s not all that big or impressive, but there’s something magical about the island’s twisty, hair-like trees and its bubbling, critter-filled waters. Why, it’s almost like it’s smiling at the children and welcoming them to play…

From Foreword Reviews
Surrounded by wisps of seaweed and schools of glimmering fish rests Giant Island: a collection of craggy rocks on which a small copse of trees grows. As Grandpa casts his line, the children take to exploring, discovering the wonders—and secrets—of the small island. Every blade of grass; multifaceted rocks; and starfish caught in the giant’s stringy, seaweed hair are lovingly rendered in whimsical illustrations that bring this fairy tale to life.

From The Picture Book Pages blog
Explore a fantastical world in Jane Yolen and Doug Keith‘s ‘Giant Island’. Two children, their dog and their grandfather boat out to an island for a day of fishing and exploring. Stepping off of the motorboat and onto the craggy shoreline of Giant Island, they see that the island is, in fact quite small. Little do they know, it holds a secret larger than life.

Their grandfather begins fishing and makes himself comfortable. It seems, maybe, he’s been here before. The children set off exploring the little island where they find stone steps, a rocky cave, and clues hinting at a mythical presence.

After diving into the waters, they discover the magic of Giant Island and the secret lurking just below the surface.

A fun day out with their grandfather turns into a whimsical adventure two children won’t soon forget. Jane Yolen weaves a legendary tale full of magic and mystery. Evoking themes of friendship, discovery, and fantasy, clues are revealed that point the children toward the true nature of the island.

The relationship between the children and the dog really stands out. The children speak to the dog and it responds with enthusiastic barks as if it knows just what they’re saying.

Readers young and old will be enthralled with Doug Keith’s fantastical illustrations. Using a combination of gouache paint and coloured pencil, Keith creates a stunning realm where giants roam.

The illustration with the giant blowing bubbles underwater as he holds his stony hand to his lips is fantastic. The children and their dog are swirling around, playing in the bubbles, blown from the giant.

The effect he achieves with his illustrations is really colourful and captivating, a feast for the eyes and the imagination.

Bubbling with magic, Jane Yolen and Doug Keith’s ‘Giant Island’ is a mythical adventure for readers of all ages. The humungous rock formations resembling human forms, mimetoliths, will leave you daydreaming about your next outdoor adventure. I have no doubt this will be a picture book children will ask to read again and again.

From Delia Sherman, anthologist and fantasy writer
A beautifully imaginative tale of discovery and magic and family history on an island that really lives up to its name.

From David L. Harrison, author of THE BOOK OF GIANT STORIES
There is a place. A magical place. A magical place with giants who keep giant secrets. Author Jane Yolen discovered the place and only Jane knows the way. Only the artist Doug Keith knows what it looks like. Want to go? Grandpa has a sturdy boat to take you there. Hop in. Keep your eyes wide open. There may be more than one giant in this magical place with giants who keep giant secrets.

From Jean Davies Okimoto, author of Dear Ichiro
Doug Keith’s delightful and humorous illustrations make this trip to Giant Island an enchanting and magical adventure for all those lucky enough to come along.

From Molly Murrah, watercolor artist
Giant Island is a charming children’s tale filled with magical illustrations that will keep your child fascinated and engaged for a very long time. Every illustration is bewitching, and the more you look… the more you see.

From Benjamin E. Sapp, director of University of Findlay’s Mazza Museum
I love how Jane Yolen’s text and Doug Keith’s illustrations come together to make this lovely work of art from cover to cover!

From Terri Cohlene, freelance editor & art director
Giant Island is a delight, from the beautiful, embossed cover, to the twist ending, to the provocative end papers. Doug Keith does not disappoint with his quirky sense of humor and fantastical imagination. Paired with Jane Yolen’s fun text, this is a perfect story to explore over and over and over again! You will discover something new and wonderful each time!

From Herb Weisbaum, Emmy Award-winning broadcaster
What fun! Doug Keith’s uniquely creative illustrations jump off the page and bring Giant Island to life! And how nice to have a kids’ story about a giant who is friendly!

From Faranae, HabitRPG Book Lists blog
The story is nice and whimsical, and I think parents are going to have “fun” with the incessant questions from the kids about whether the giant is real or not.

Jane Yolen is a writer of fantasy, science fiction, and children’s books. She is the author or editor of over 400 books, including Owl Moon, winner of the Caldecott award, How Do Dinosaurs Say Goodnight and the rest of the beloved How Do Dinosaurs series, and The Devil’s Arithmetic, a middle grade Holocaust novel. She lives in Western Massachusetts. There are two islands in Jane’s background: Manhattan Island where she spent her early years, and the Isle of Skye in Scotland where she has spent lots of time for the past 30 summers. Either of them could have housed a giant.
You can find out more about Jane and her works on her website.

Doug Keith has over thirty years’ experience as an illustrator, designer, and fine artist. His resume includes forty plus illustrated books, a Benjamin Franklin Award for interior design, a television Emmy award for graphic design, and commissioned works at Windermere Real Estate and Puget Sound Energy. Doug lives in Seattle, Washington, surrounded by the mountains and water which inspired Giant Island.