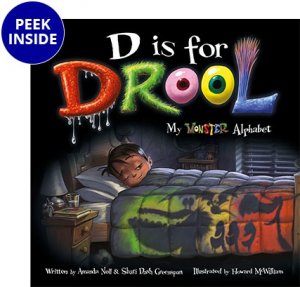 D is for Drool

When Ethan can’t sleep, he doesn’t count sheep – he says his ABCs. But in monster-loving Ethan’s alphabet, A is for Arms, B is for Belly, C is for Claws, and D is for Drool!

Kids will love pointing out the alphabetical attributes on the silly monsters that parade across Ethan’s room – like earlobes, noses, spikes, and wings – and discovering where all of those monsters are headed.

By the time Ethan gets to Y, he’s Yawning. And by Z, kids will be ready to sleep as Ethan does, surrounded by the tails, tentacles, and drool sticking out from under his bed. ZZzzzzz.

D is for Drool is a monstrously magnificent ABC book that offers a new way to fall asleep. With the perfect balance of giggles and shivers, it is a captivating companion to the award-winning I Need My Monster series. 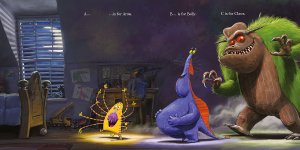 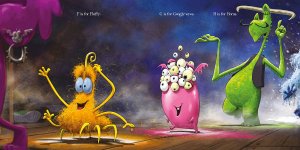 From Kirkus
Why count sheep when an alphabetical array of monsters is queued up to crawl under the bed?
Lying wakeful in his moonlit bedroom, the pale-skinned lad from the I Need My Monster series begins with “A…is for Arms.” This cues the entry of a multilimbed, popeyed, purple-striped yellow creature at the head of a parade of blobby, slobbery boojums as wildly diverse of shape as they are saturated of hue. It’s almost a pity this book is codex bound instead of concertina folded, as careful design finds elements from the right edge of one double-page spread continuing on to the left edge of the next. The green-furred, horned monster on an early spread is revealed to have a long, spiked tail after the turn of the page, for instance, and the substance dripping from the many noses of a blue, finned creature makes quite the trail of bright pink ooze across the following spread. Readers will enjoy flipping back and forth to see the contiguity. Being all smiles and more likely to elicit snorts of amusement than screams of terror, the monstrous marchers crawling, oozing, slithering, or strolling into and out of view with each page turn have the intended soporific effect. As the alphabet progresses, the lines of narrative become more and more…stretched…out…until a final “Y…is…for…Yawn…and…Z……is for…” signal mission accomplished. (This book was reviewed digitally.)
A monstrously effective lid-dropper. (Picture book. 3-5)

From Foreword Reviews
A bedtime story that flips the monster under the bed on its head, this whimsical alphabet book is a surefire hit. Ethan’s parents have told him to try counting sheep when he can’t sleep, but he prefers counting monsters. A parade of colorful creatures appears as he works his way through the alphabet. Their claws, spikes, and warts are rendered in exquisite detail before the book concludes with Z for zzz.

From BabyBookworms
First let me begin by saying how absolutely adorable and imaginative the illustrations in this book are.  I love them!  The monsters are not scary but so innovative and animated that kids will love each and every one of them.
When Ethan is unable to sleep he recites his ABCs.  He doesn’t count sheep but monsters.  Each letter is attributed to the appearance and action of a monster:  A is for Arms, B is for Belly, C is for Claws, and D is for Drool!  Kids will love this book and all the others in the award-winning series “I Need A Monster.”  This book a pure delight from A to ZZzzzzz when Ethan finally falls asleep.  The book is playful, creative and a very fun read.  I highly recommend this book!
Storywraps Rating – 5 HUGS!

From GrandmaIdeas, Nina Lewis
How many alphabet books do you think there are on the market? I did a VERY quick (and limited) search and found well over 50. Man oh man! A is for apple and B is for banana. Then there are things like oranges and strawberries with a truck thrown in for good measure. Yawn.
How many times does it take for a parent reading a typical alphabet book before she’s bored beyond tears? Not very many, I predict.
But then along comes an alphabet book that teaches kids their alphabet and is also very engaging for toddler and parent alike. D is for Drool is that book. Let’s shout huzzah from the rooftops!

Counting monster-ly things will guarantee you’ll never be bored!
Ethan, the little boy in the book, is not sleepy. No siree, Bob. Instead of counting sheep to help him sleep, he counts monster attributes — like monster bellies, monster noses, and monster wings. I love that! That’s a lot more entertaining than boring white sheep.

There are lots of fun things to discover on all of the pages. For instance, J is for jumping. There are tiny monsters jumping around. But if you look closely, you’ll see that some of those itty bitty monsters are throwing snowballs and making snow angels. That’s because the previous monster is leaving snow as he walks along. So clever!

Then there’s the monster that oozes stuff out his plethora of noses . . . that other monsters have to avoid walking in! Yuck! By the time Ethan gets to the letter Z, he’s ‘cutting z’s (he’s asleep).
And what about all of the monsters? Why they’re asleep under Ethan’s bed because EVERYBODY (kids especially) knows that there are monsters under the bed!

I absolutely love this book! It’s clever. It’s innovative. It’s colorful. It’s charming. It’s one that will delight toddlers and parents alike for a long time. Oh. And also older siblings . . .What a monstrously magnificent ABC book! I highly recommend it. And I think you’ll love it, too.

Amanda Noll is the author of the award-winning I Need My Monster series. She is an elementary school teacher/librarian and lives with her husband and children in Spanaway, Washington. She is also a grandmother and enjoys sharing stories with all the little monsters in her life. The monster under her bed is Gertie. You can find out more about Amanda and her work on her website.

Shari Dash Greenspan has been the editor and art director at Flashlight Press since its launch in 2004. She conceived of and co-wrote D is for Drool based on the monster world created by Amanda Noll and Howard McWilliam. The monster under her bed is Yankel who loves to yank on her blanket.

Howard McWilliam is the award-winning illustrator of the I Need My Monster series, When a Dragon Moves In series, John Cena’s Elbow Grease series (a NY Times #1 Bestseller), and many other children’s books. He is the cover artist of The Week (US & UK), and he lives with his wife and three sons in Cheltenham, England. The monster under his bed is Brompton. You can find out more about Howard and his work on his website.